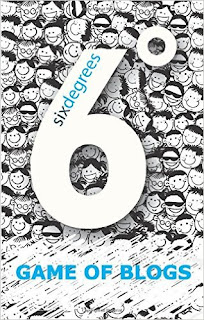 Blurb:
As part of their #CelebrateBlogging initiative, BlogAdda.com, ran the first edition of Game of Blogs in September 2014. Five characters and their descriptions were provided. The objective was to write a fictional story revolving around these characters. Bloggers came together as teams and after three rounds filled with its own set of twists and turns, three made it to the end.
The three stories in this book are a fascinating example of how one set of characters can have interesting lives with completely different dimensions. Six Degrees is a result of how collaboration can truly breed creativity in the modern day world of connected living.

My Review:
When Blog Adda put this up for review, the moment I saw it I signed up for the review. I was a part of the Game of Blogs activity and I knew it was interesting. Each individual has his or her own ideas. But putting different peoples ideas together and weaving a single story out of it is a challenging task indeed and hence I wanted to see how the winning teams had done it and indeed the results are wonderful.
This book contains three stories, each written by a different team. But the best part is that the characters remain the same. The stories revolve around the lives of six individuals. Shekhar Dutta, a stay-at-home dad who is a writer, his wife Tara Dutta who has a high profile job in a media house, their 9 year old daughter Roohi, Aryan Ahuja- their neighbour, Jennifer Joseph- a photographer and Cyrus Daruwala- a law student.
The first story, “The Awakening” by Team By Lines is a Sci Fi story. The Duttas lives which running smoothly till then are now in chaos. Shekhar’s manuscript which he so painfully types out on the typewriter is turned to ashes every single morning. On a friend’s insistence, Tara gives shelter to Cyrus Daruwala. Roohi likes Cyrus. But then Aaryan Ahuja, their neighbour who is a exobiologist, finds some signs of an alien in his neighbourhood. When his machine plots the 3D form of the alien, Aaryan, Shekhar and Jennifer who is Shekhar’s childhood friend who shares his interest about aliens are all shocked. The story progresses as to how the earth is in danger of getting attacked by the Gray Aliens and how the peace keepers, or the good aliens are trying to protect the humans but the selfish humans don’t care to listen. Will the earth be saved?
The next story is called “Entangled Lives” by Team Potliwale Baba. A murder mystery this one definitely is! Shekhar is frustrated because his work as a freelancer isn’t so interesting after all. Tara is too busy with her work to find time for her family. They have a full time maid Naina. Cyrus left his house in Delhi is search of his dad who deserted his mom when he knew she was pregnant with Cyrus. Jennifer is working as a photographer but she is insistent on striking a good rapport with Tara so that Tara can give her a job in her firm. And then the unfortunate day arrives. Roohi has an accident as she hurts herself while rescuing a kitten. Since Cyrus was around when the accident happened he takes her to the doctor and then takes her home. Tara is distraught after listening about Roohi’s accident and Jennifer offers to drop her home. So when the Dutta’s and these two strangers are in the Dutta’s house, Naina is murdered. Who killed Naina? Was Naina the intended victim or was it someone else? Inspector Jawalkar aka ‘Java’ is supposed to investigate. Aaryan Ahuja claims to have seen the murder. Will that help? Will Java solve the mystery?
The third story “Missing- A journey within” by Team Tete-a-Ten is about an emotional journey of losing and finding. Roohi goes missing from school one day. Shekhar thought that Tara would pick her up after school as Roohi was supposed to attend the birthday party of her friend. But Tara has some important meetings scheduled around the time and informs Shekhar about it. But Shekhar somehow misses that information. Shekhar and Tara form search parties with the help of their friends. They even post on social media for any information regarding Roohi. That is how Jennifer finds that post. Jennifer, who is a photographer, finds Roohi’s face quite familiar and when she looks through all the pictures she clicked that day she is surprised. Cyrus Daruwala is missing from his house in Delhi and no one knows about his whereabouts. Fanus his friend visits Cyrus’s house and when he tells his parents that they failed to understand their son, the parents are furious and on listening to what Fanus had to say, Cyrus’s father calls off the search operation. Will Cyrus be found? Will Roohi be found?
Though these three stories revolved around the same characters, each story was so different that I never mixed up the characters at all. Each story provides a different dimension to the characters that each story is wonderful read. The narration is simple but wonderful. Each of the teams has done a wonderful job researching about the facts, bringing all the ideas together and piecing it together so brilliantly! Indeed, collaboration can work wonders. Each of the stories has a message or two in store for each one of us.
The book is not perfect. There are some grammatical errors and some typos. But what is worth noting is that these stories are not written by seasoned writers, yet the content, the stories, the narration are praiseworthy!

My Rating:
3/5
This review is a part of the biggest Book Review Program for Indian Bloggers. Participate now to get free books!